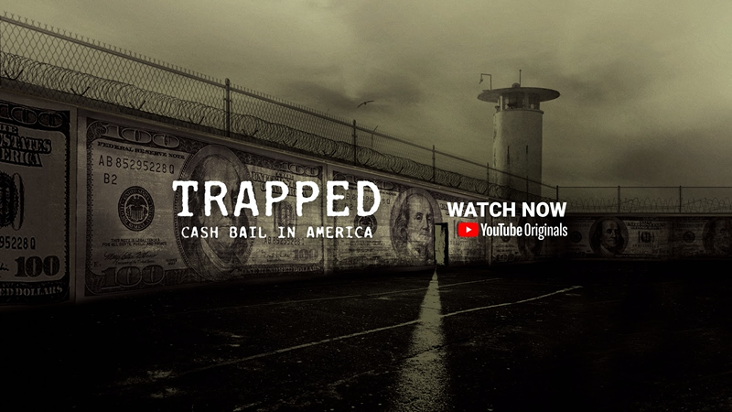 Today (October 12), YouTube Originals will launch the new documentary, “Trapped: Cash Bail in America,” which explores the growing movement to end the inherent economic and racial inequalities of cash bail while highlighting victims impacted by an unjust system, the tireless campaigners fighting for criminal justice reform, and a bail industry lobbying to maintain the status quo. The documentary will be available to stream for free only on the Real Stories YouTube Channel beginning at 7p ET l 4p PT.
Every year, millions of American men and women are incarcerated before even being convicted of a crime – all because they can’t afford to post bail. How did we get here? “Trapped: Cash Bail in America” shines a light on our deeply flawed criminal justice system and the activists working to reform it.
The film will premiere on the Real Stories YouTube Channel at 7p ET l 4p PT with a live chat and discussion with the filmmakers and cast from the film. Viewers can set a reminder here to be notified.
Watch “Trapped: Cash Bail in America” HERE.
“Trapped: Cash Bail in America” also gives a face to those who are forgotten behind bars and spotlights the human impact on the individuals stuck in jail before their trial. The harsh repercussions this has on the accused and their families is outlined through the story of a single mother separated from her children for a non-violent felony. With activism starting at a local level, a national conversation is slowly beginning to emerge to combat mass incarceration and free Americans unequally imprisoned.
“Trapped: Cash Bail in America” is produced and written by Chris L. Jenkins and directed and edited by Garrett Hubbard. Nadine Zylstra, Head of the YouTube Originals Learning, Impact and Kids & Families team, and Ian Roth on the Learning and Impact development team oversee the documentary. Malika Saada Saar serves as Global Head of Human Rights for YouTube.
The documentary is part of YouTube’s global slate of new and returning projects, dedicated to amplifying Black voices. “Trapped: Cash Bail in America” continues YouTube’s long-standing commitment to celebrate a broad and diverse set of perspectives on the platform. Additional projects from the slate includes a documentary series from Patrisse Cullors, co-founder of Black Lives Matter, and a HBCU Homecoming (Historically Black Colleges and Universities) livestream special.
“Trapped: Cash Bail in America” won the Social Impact Award at the A Show For A Change Film Festival and is also opening the (In)Justice For AllFilm Festival on December 10, 2020.
# # #
About YouTube Originals:
YouTube Originals are award-winning, creative and engaging scripted and unscripted series and films across music, personalities and learning for fans all over the world. Spotlighting both YouTube creators alongside Hollywood’s biggest stars, YouTube Originals provide an experience that only YouTube can offer. By tapping into the platform’s growing global community, fan engagement product capabilities, and innovative content mixed with pioneering live-streamed specials, there is truly something for everybody. Fans experience YouTube Original content through ad-supported YouTube as well as YouTube Premium, a subscription service that offers access to YouTube Original series and movies, a streaming music platform, and an uninterrupted, ad-free experience across all of YouTube. YouTube Originals are available in nearly 80 countries worldwide.