She is timeless… She is unapologetic. She is marvelous.

The marvelous Melba Moore who rode the music charts in the 80s now demonstrates that staying power has never gone out of style. After four decades of life on stage, her appeal is timeless with a new album – Imagine – which is climbing the charts. She is singing new songs today with a vocal range that has not dimmed with time. Her voice is powerful with purpose and passion. Her multi-octave vocal range continues to wow all who listen.

The new album, “Imagine’ –marks a return to her R&B roots. With this album, marvelous Melba Moore continues to leave nothing to the imagination because we hear her passion – clear and direct. Her conversations today reflect the struggles of many generations — from breaking barriers to transcending the waves of time. So In Love, the first release from IMAGINE, her latest offering to the musical landscape, spent 3 weeks atop The UK Soul Top 30 Chart in November 2021 and returned Moore to airwaves in the United States and around the globe. The world is ready for MARVELOUS MELBA!

Melba Moore brings history to her new project IMAGINE and creates a relevance that we all can feel. Melba’s rich and soulful sound harkens back to her chart-topping successes the 1970s and 1980s. However, “I have lots of younger people bringing me new music,” Melba says, but stands soundly on his musical history, noting that “we’re the foundation of it.” “Since God has given me my good health and ability to continue to do my work, it’s my privilege now to say, ‘This is where it came from, this is how it was, and I’m here to pass it on to you.’ It is not only the foundation of Afrocentric culture, but it’s part of America and world history.” And Melba Moore is soundly rooted in that history!

The Marvelous Melba Moore has been making new waves in music for some 50 years. While she set many records over the years, her music continues to win the hearts of new generations. Ms. Moore’s 1978 dance classic “You Stepped Into My Life” continues to ignite audiences. Melba is stepping into the life of new generations with her new music and climbing the charts one step at a time.

5. Since I Took My Heart Back

6. Take Her Picture Down 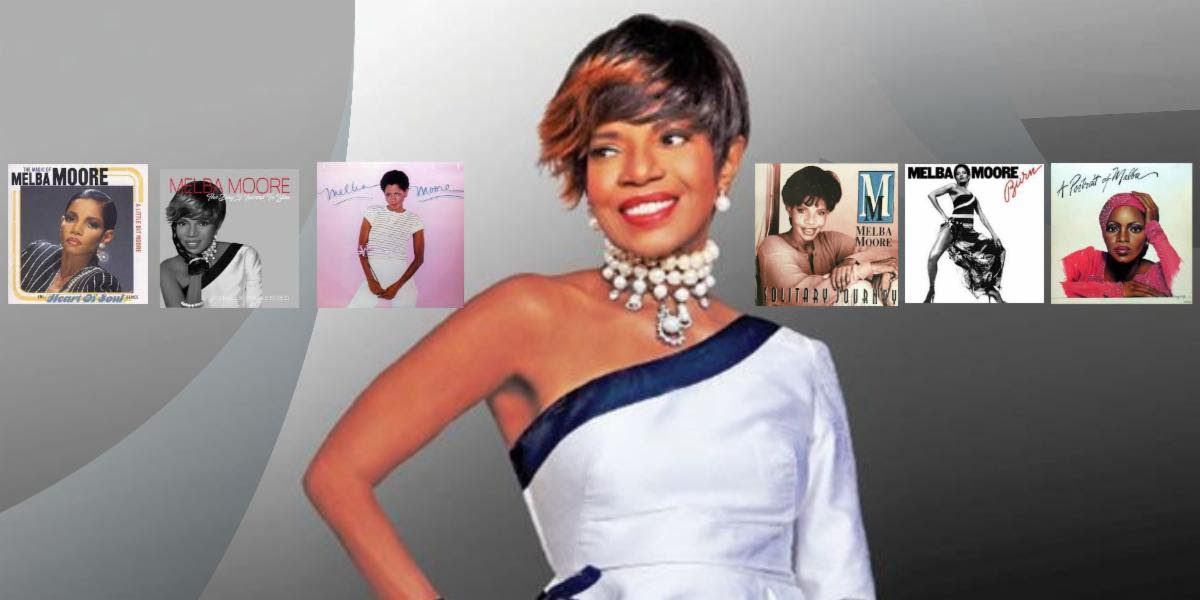 Marvelous Melba is truly a triple threat in the entertainment industry — winning top honors in music, theatre, and television:

Melba Moore has done it all, twice. At the tender age of 10, Melba notes that it was then that she was introduced to music and that “I didn’t have any music in my life before my mother married my stepfather. He introduced music into our home and into my life.” From that moment forward, Melba began to develop her 5-octave, note-holding soprano that would soon bring audiences to their feet.

· Won a Tony Award for best featured actress in a musical for her role in the musical “Purlie,”

· Was first African American woman to play the female lead in the musical “Les Misérables” on Broadway.

The Newark, NJ Arts High School graduate started doing recording sessions after a chance meeting with singer/songwriter/composer Valerie Simpson (of Ashford & Simpson). That opportunity in the studio led Melba in the company of the Broadway musical “HAIR!” First in the ensemble of the show, Melba’s name was tossed into the conversation when actress Diane Keaton left the show and Melba took the female lead and broke all the rules, being the first Black woman to replace a white actress in a featured role on Broadway.

The journey of Melba’s career took her meteorically from there to the lead of “PURLIE,” a musical adaptation of a play written by acting husband and wife pioneers Ossie Davis and Ruby Dee. That role and its musical soundtrack would earn Moore a Grammy nomination as Best New Artist in 1971 and a Tony Award for Best Featured Actress. The power of her presence on Broadway got Melba noticed and she became a virtual sensation.

· Starred in her own sitcom, “Melba.”

Melba Moore became so well known that network television offered her a summer variety series. Starring Melba and actor/singer Clifton Davis, who was starring on Broadway in another show, the duo, who were dating, were given the choice to bring their mass appeal into Middle America.

· Performed a special rendition of ‘Lift Every Voice and Sing’

·  Merged her inspirational and gospel style in many songs.

Soon after the success of the ‘The Melba Moore/Clifton Davis Show,” it was time for her soaring soprano to take her foray into the recording studio.

First signed to Buddah Records, Melba had hits like “This Is It,” “Lean On Me” and “You Stepped Into My Life,” garnering Grammy nominations and international success.

Later signed to Capitol Records, she followed that success with “Love’s Comin At Ya” and then a string of R&B hits followed, including “Read My Lips”—which later won Moore a third Grammy nomination (for Best Female Rock Vocal Performance), making her just the third black artist after Donna Summer and Michael Jackson to be nominated in the rock category.

Hits like the #1 “A Little Bit More” with Freddie Jackson and “Falling,” a hypnotic ballad that features one of the longest held notes in recorded history. Moore would also record “Lift Every Voice And Sing” (the Negro National Anthem) at the behest of Dr. Dorothy Height, the president of the National Council of Negro Women, who wanted Moore to use her formidable talent to ensure that the song would reach a new generation.