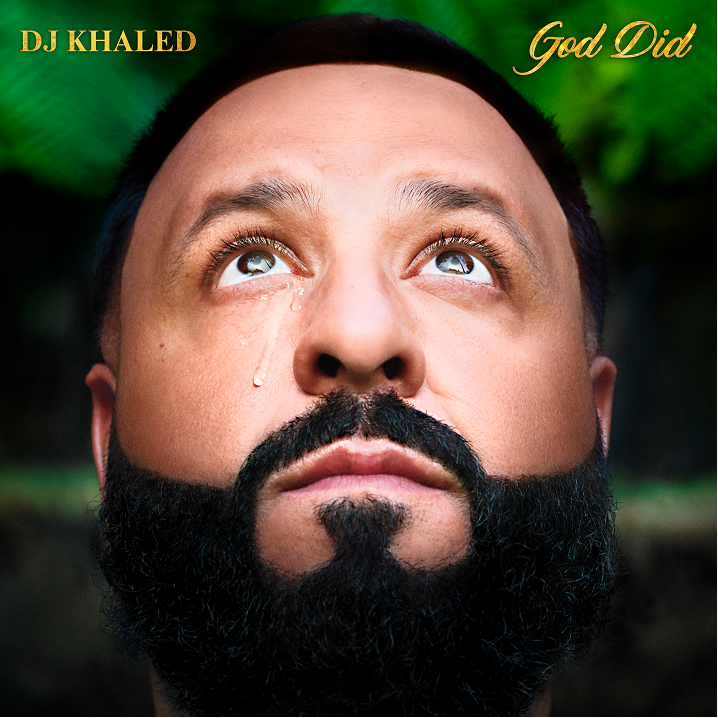 Delivering the hip-hop event of the summer, he welcomed an A-list cohort of friends to join him for his latest magnum opus. For the first time ever, he collaborates with none other than Dr. Dre and The ICU in addition to joining forces with Eminem, Future, Kanye West, SZA, 21 Savage, Lil Wayne, Lil Durk, Roddy Ricch, Travis Scott, Latto, City Girls, Kodak Black, Quavo, Takeoff, Gunna, Bounty Killer, Sizzla, Buju Banton, Skillibeng, Capelton, Fridayy, Don Toliver, Jadakiss, Nardo Wick, Vory, John Legend, and the late Juice WRLD. Of course, he also reunites with longtime brothers Drake, JAY-Z, and Rick Ross, while his sons Asahd and Aalam guest and co-Executive Produce once more. Check out the full tracklisting below.

Additionally, he joined forces with Snapchat and Los Angeles-based agency BLNK to create and launch four immersive augmented reality Lens experiences in honor of GOD DID.

As part of this immersive collaboration, the newest Lens arrives. It utilizes and leverages Snap’s custom Marker technology, which triggers a Lens experience tied to a location or image, to bring the cover artwork to life when fans scan the cover or Times Square billboard with the Snapchat Camera. The Lens unlocks DJ Khaled reciting the lyrics from his new single “Grateful” now available on Sounds, Snapchat’s creative tool that enables Snapchatters to add licensed music to their photo or video Snaps.

Khaled recently appeared on REVOLT’s Drink Champs for a hilarious and candid interview. Watch it HERE. In addition to a wide-ranging Rap Radar interview, he also sat down with Complex at home for an in-depth conversation, covering everything from Barack Obama to JAY-Z. As part of the feature, he opens up about GOD DID, his vision for the future, and so much more.

He notably set the stage for the album with “Staying Alive” [feat. Drake & Lil Baby]. It has already amassed over 34.7 million Spotify streams and 12 million YouTube views on the music video. Plus, it bowed at #5 on the Billboard Hot 100, holding strong on the chart.

The anthem king has returned with GOD DID, and he delivers his biggest, boldest, and best body of work to date.

Last year, Khaled unleashed his twelfth full-length album, KHALED KHALED [We The Best Music Group/Epic Records]. It arrived as his third #1 debut on the Billboard Top 200, sixth #1 on the Top Rap Albums Chart, and fourth #1 on the R&B/Hip-Hop Albums Chart. It also reached platinum status.

Two words say it all, GOD DID. 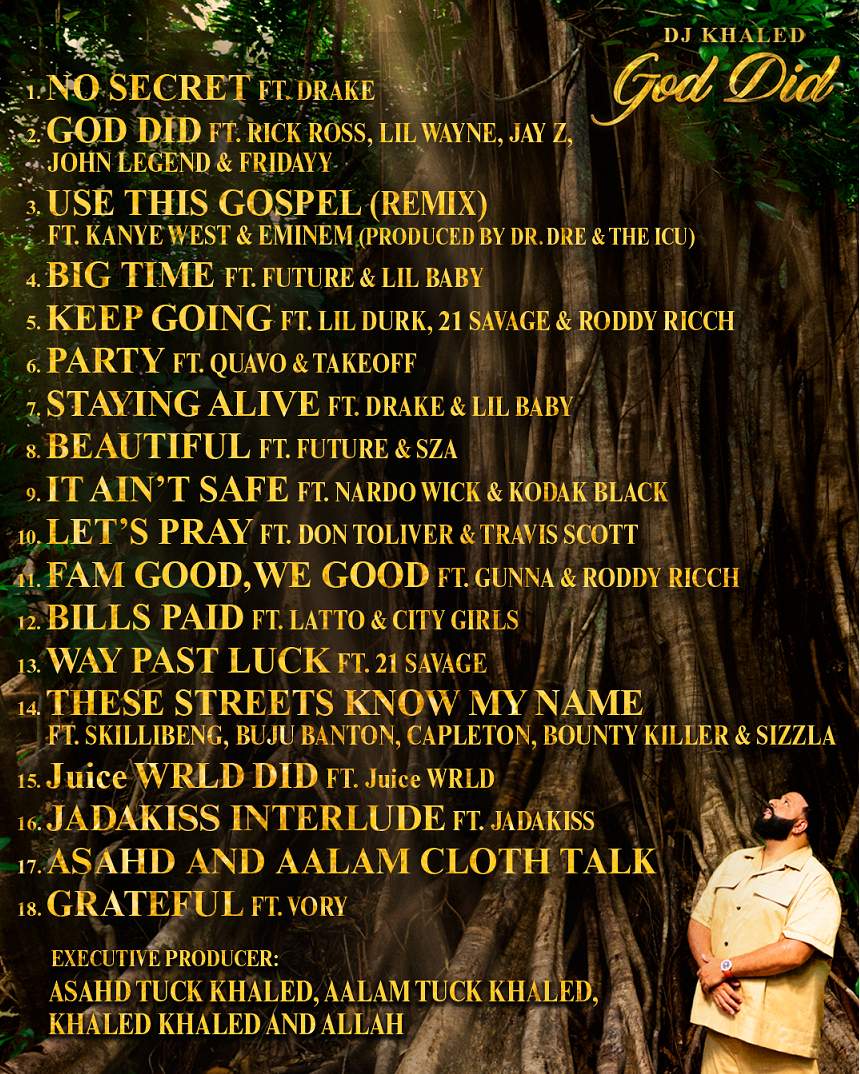 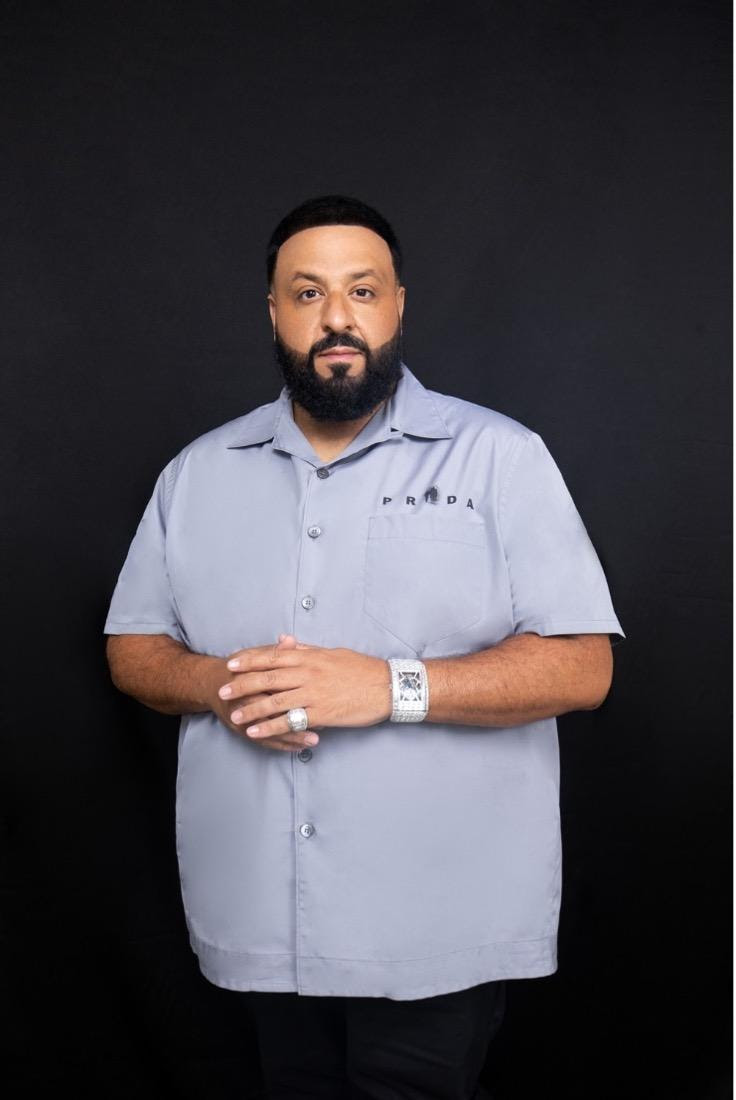 For over two decades, the very mention of DJ Khaled has implied an elevated level of musical greatness, entrepreneurial excellence, and cultural impact. You’ve heard him across a GRAMMY® Award-winning multiplatinum catalog, seen him in blockbusters such as Bad Boys For Life, caught him on the cover of Rolling Stone, watched him on numerous television programs, and felt his presence from the streets all the way up to the Barack Obama White House. He has achieved dozens of multiplatinum and gold certifications, including the 9x multi-platinum Billboard Hot 100 #1 “I’m The One” [feat. Justin Bieber, Quavo, Chance the Rapper, & Lil Wayne], 6x multi-platinum “Wild Thoughts” [feat. Rihanna & Bryson Tiller], and double-platinum “No Brainer” [feat. Justin Bieber, Chance the Rapper, & Quavo]. The latter propelled his 2019 album, Father of Asahd [We The Best Music Group/Epic Records], to the top of the charts. Not only did it garner a platinum certification, but it also became his third consecutive Top 2 debut on the Billboard Top 200 and emerged as the “#1 Most-Streamed Record” upon release. To date, he has moved over 20 million singles and 6 million albums in addition to gathering 4 billion-plus streams.

Not to mention, he launched We The Best Music Group—a record label, management, publishing, and production company and in-demand studio. As a committed philanthropist, he founded his 501(c)3 organization The We The Best Foundation. It uplifts individuals throughout underserved communities across the United States and supports various non-profits. He has supported the fight against COVID-19., U2 frontman Bono recruited him as the first social media ambassador for Project Red, and he serves as the national spokesperson for Get Schooled. Now, the power of this legacy defines his thirteenth full-length album—which bears the name—God Did [We The Best Music Group/Epic Records], preceded by the current banger alongside frequent collaborators Drake and Lil Baby, “Staying Alive.”