This Camping, Glamping, Jamming All-Night Concert will be the Summer Celebration Event you’ve been waiting for all year!

Celebration Event you’ve been waiting for all year! 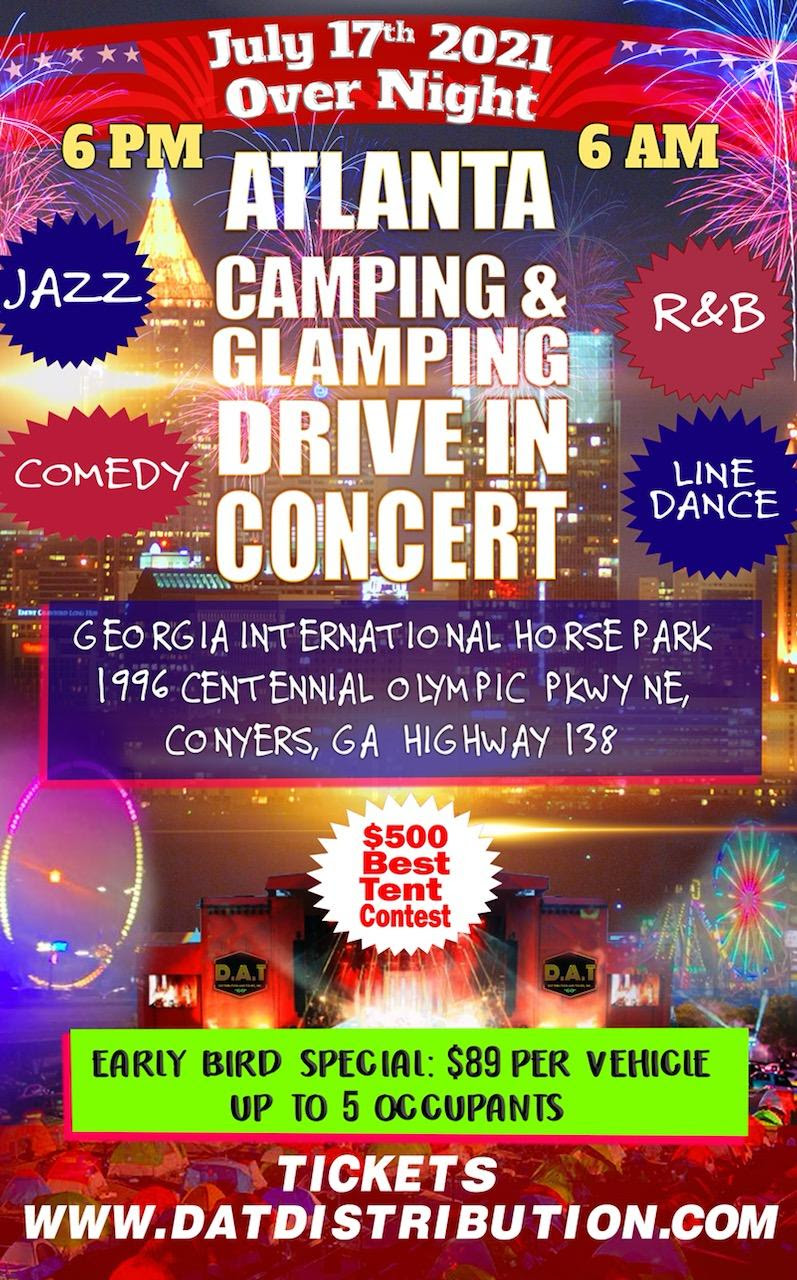 A CULTURAL VERZUZ: ATL VS THE WEST INDIES

This Camping, Glamping, Jamming All-Night Concert
set for July 17th will be the Summer Celebration Event
you’ve been waiting for all year!

Produced by D.A.T. Distribution and Tours, headed by entertainment maverick Mark Skeete, THE ATLANTA CAMPING & GLAMPING DIVE-IN CONCERT is going to change the game and allow music lovers and concert goers to safely return to the enjoyment of music, with the covering being blown off of the venues that we haven’t re-entered post COVID-19. With an assemblage of hot and hilarious comedians and a musical smorgasbord of artists from R&B, jazz and all of the music of the Caribbean, this power-packed event will prove to be iconic because it has never happened before! “This is going to be the music of Black America in Atlanta meeting the whole scope of music from the islands. It’s gonna be FREAKNIK VERZUZ CARNIVAL! HIP-HOP VERZUZ DANCEHALL! It is ATLANTA VERZUZ THE WEST INDIES and all those who are fans of great music and entertainment will be declared the winners! THE ATLANTA CAMPING & GLAMPING DRIVE-IN CONCERT will be a multicultural get-together for people who love music, love entertainment and who need to know that they are safe to enjoy it all outside, where transmission is all but eliminated and where they are gathered with the people they have already been with in their pods and personal spaces. So they can get to the PARTY!”

The brainchild of Skeete, who has been in the music, television, film and concert landscape for decades (having worked with everyone in entertainment from superproducer Dr. Dre to TV and film director Ted Demme, and who helped to establish some of the current-day titans of the industry), this innovative Drive-In
Concert, hosted The Georgia International Horse Park, will feature such musical talents as R&B supergroup Surface (with their #1 hits “Shower Me with Your Love,” “The First Time” and their monster jam “Happy”) and The Rude Boys will take the stage with their #1 smash hit “Written All Over Your Face,” along with the jazz stylings of the beautiful Julie Dexter and the smooth saxophone of Trey Daniels, along with comedians and a Caribbean line- up sure to turn the ATL into the spot to be, all night long! THE ATLANTA CAMPING AND GLAMPING DRIVE-IN CONCERT
will go from 6PM to 6AM and after 11PM, concertgoers will have the option of turning it up but tuning in for the silent party (where you can tune your headsets into the music directly), so that they can keep on jamming without the music blasting!

The visionary that is Mark Skeete has touched every corner of the entertainment industry, born in the UK before moving to and being raised in the Caribbean before making his way to America. He grew up with the likes of Tony Thompson, the ferocious drummer from the iconic group Chic and Freedom Williams from
C&C Music Factory. He got Ed Lover to MTV and helped turn entertainment mogul Steve Stoute into the industry giant he is today. So when the idea came to him to bring people together, safely but in a big way, and others said no, Skeete bought land and took the idea of this new Woodstock meets protection protocols and social distancing and launched an idea whose time has come and whose audience has been waiting!

He is an amalgamation of all that is THE CULTURE and he is bringing it all together for this ALL NIGHT THING! “I have always followed my gut when it comes to the chances I take and the choices I make. I think that this is the wave of the future, especially as we work on how we come out of all we’ve been through in the last year plus. People can enjoy the music and the comedy and the culture and each other, without the stuff we still don’t talk about being in our heads. We want the people to have a great time and we are putting together a monster of a show!
THE ATLANTA CAMPING AND GLAMPING DRIVE-IN CONCERT is going to be FIYAH! People are calling to see if we have room vehicles the size of buses. We are going to make this a SUMMER CELEBRATION!” The Atlanta Camping and Glamping Drive-In Concert sounds the musical trumpet to the world that says on July 17th,

WELCOME AMERICA!
WELCOME TO ATLANTA!
WE ARE BACK IN BUSINESS