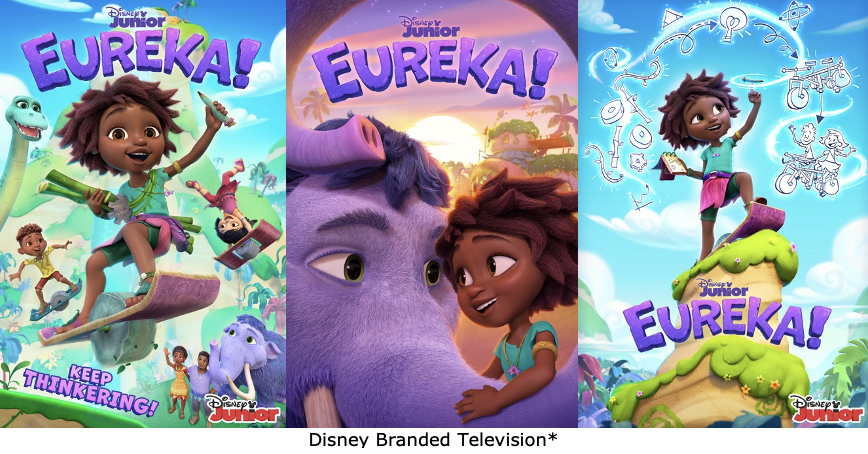 The series is set to premiere WEDNESDAY, JUNE 22, at 7:30 p.m. EDT/PDT on Disney Junior. An initial batch of episodes will also premiere the same day on on-demand platforms and streaming on Disney+.

Set in the fantastical prehistoric world of Rocky Falls, “Eureka!” follows the story of Eureka, a young girl inventor who is way ahead of her time. She designs inventions and contraptions in the hopes of making the world a better place and moving her prehistoric community into a more modern era. The series stars Ruth Righi (Disney Channel’s “Sydney to the Max”) as Eureka, Renée Elise Goldsberry (“Hamilton”) and Lil Rel Howery (“Free Guy”) as Eureka’s parents, Roxy and Rollo, and Javier Muñoz (“Hamilton”) as her teacher, Ohm.

*COPYRIGHT ©2022 Disney Enterprises, Inc. All photography is copyrighted material and is for editorial use only. Images are not to be archived, altered, duplicated, resold, retransmitted or used for any other purposes without written permission of Disney Channels Worldwide. Images are distributed to the press in order to publicize current programming. Any other usage must be licensed. Photos posted for Web use must be at the low resolution of 72dpi, no larger than 2×3 in size.

Press materials are available at www.dgepress.com.

Disney+ is the dedicated streaming home for movies and shows from Disney, Pixar, Marvel, Star Wars, and National Geographic, along with The Simpsons and much more. In select international markets, it also includes the new general entertainment content brand, Star. The flagship direct-to-consumer streaming service from The Walt Disney Company, Disney+ is part of the Disney Media & Entertainment Distribution segment. The service offers commercial-free streaming alongside an ever-growing collection of exclusive originals, including feature-length films, documentaries, live-action and animated series, and short-form content. With unprecedented access to Disney’s long history of incredible film and television entertainment, Disney+ is also the exclusive streaming home for the newest releases from The Walt Disney Studios. Disney+ is available as a standalone streaming service or as part of The Disney Bundle that gives subscribers access to Disney+, Hulu, and ESPN+. For more, visit disneyplus.com, or find the Disney+ app on most mobile and connected TV devices.

Disney Branded Television encompasses the creative storytellers, and production and marketing teams responsible for Disney-branded television series, movies and other programming spanning live-action, animated and unscripted formats. The group helps fuel the Disney+ streaming platform and Disney Channel, Disney XD and Disney Junior linear networks with content geared toward kids, tweens, teens and families, with stories that are imaginative, aspirational and reflective of their world and experiences. Recent projects include “High School Musical: The Musical: The Series,” “Monsters at Work,” “The Mysterious Benedict Society” and “Marvel’s Spidey and his Amazing Friends.” Disney Branded Television has created some of the most iconic and award-winning properties and franchises including Peabody Award winners “Doc McStuffins” and “The Owl House”; Emmy® Award winners “Big City Greens” and “Elena of Avalor”; the beloved “Mickey Mouse” cartoon shorts plus the Disney Channel Original Movie (DCOM) franchise, comprised of more than 100 titles.